Warning: Illegal string offset 'td_post_template' in /home/scantily/public_html/wp-content/themes/Newspaper/includes/wp_booster/td_single_template_vars.php on line 75
 ‘We had been through so much and fought so hard and I thought my son might die’ - Scantily Dad

Home Parenting ‘We had been through so much and fought so hard and I...

Here is my second article that was published for the Irish Times.

In part two of James Doherty’s rollercoaster encounter with infertility, two becomes the magic number for him and his wife Olivia 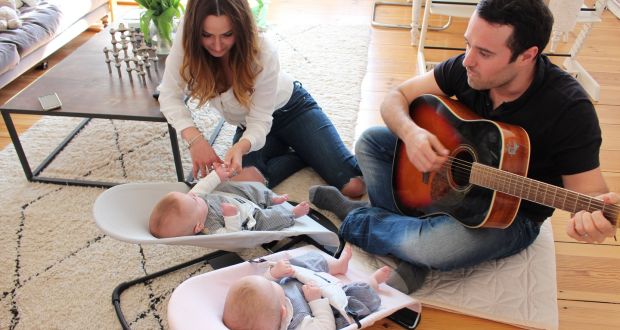 Proud parents Olivia and James with Max and Mathilda

A month after two embryos that we had made during our grueling encounter with IVF had been transferred into Olivia’s womb, Olivia went to her gynecologist for a check-up. She offered an ultrasound to see if everything was okay. I was at work and she called me to ask if she should go ahead with the scan without me. I told her to go ahead. After the scan she called me in hysterics – we were having twins.

To go from not being able to have babies to having twins was an amazing feeling. Two years earlier we, thought that we might never have children; now we were having two. A later scan would bring even better news, a boy and a girl. How our luck had changed. Four months later, around the 30-week mark, Olivia woke to find the bed wet. It was 10 weeks before the twins were due; we assumed that the wet bed was a false alarm. It was 3 am on a Monday. We decided to go back to bed and get it checked out in the morning.

After waking up, I asked Olivia if she wanted me to go to the hospital with her. She said she was fine on her own and I went to work as normal. Olivia decided to enjoy her breakfast and get the bus to the hospital. On arrival, she was rushed to the maternity ward. Her water had broken and she would have to stay in the hospital until the birth of the twins.

We were both so worried, it was much too early for the twins to join us. Their lungs were not developed enough to breathe alone outside the womb. Olivia was administered cortisone shots to speed up the process of lung development. We had no idea how long we would have to wait before they were born. It could be two weeks or two months.

On the Wednesday morning at 8.10am, my phone rang. Olivia shouted down the phone “They are coming!”

“Who is coming?” I asked, thinking she was getting visitors.

At 8.31am, I arrived at the hospital and was ushered to waiting room beside the surgery. The echoes of crying babies filled the air. Were they my babies? Were they okay? Is it not too early? Will they survive if they are born now?

A nurse told me my wife was giving birth next door, but I could not go in. It was an emergency C-section under full anesthetic. I felt helpless and guilty that I was not there holding Olivia’s hand while she was giving birth to my children.

After what seemed like an eternity, a doctor escorted me to the post-birth room, where two tiny babies lay surrounded by doctors and nurses. They were 1,490 and 1,495 grams – each about three pounds. They were the most beautiful things that I had ever seen. They were perfect.

A tear of joy rolled down my face, but the joy was short-lived. They were very premature and would have to be put directly into an incubator for the foreseeable future. Mathilda was doing quite well but Max’s lungs were so underdeveloped that he needed a machine to breathe. This broke my heart. Not only could we not hold them, but whether Max would survive or not was touch and go.

Two days after the birth, I was back working and my phone rang, it was Olivia with bad news. Max’s lung had collapsed and he needed an operation. My world seemed to stop at that moment. We had been through so much and fought so hard and I thought my son might die. On the way to the hospital, I couldn’t hold back the tears. The feeling of desperation left me feeling helpless. When I reached the hospital, I found Olivia outside Max’s room weeping inconsolably. I put on a brave face and I told her that everything would be okay.

An operation on a baby that can fit in the palm of your hand is a scary experience. Luckily, Max was in good hands. They operated on him within the hour. The operation was a success but Max was in a bad way for several days. His heartbeat was irregular and he still struggled to breathe. It was touch and go at times, but eventually, he recovered.

The next six weeks were tough. Under recommendation from the doctors, I was given a sick note while the children were in the hospital. We spent 8-12 hours there every day until they got out. Although stressful, I enjoyed kangarooing with the babies every day. Kangarooing or kangaroo care is skin-to-skin contact. It’s proven to improve premature babies’ health.

Germany is an amazing country when it comes to healthcare and how they look after their citizens. After 35 days in the hospital, we were told that we could go home in a week. We were advised to do “rooming in” before we went home. “Rooming in” is when the mother, father, and children stay in our own room in the hospital. This gave us the chance to learn how to care for the babies alone. There was a nurse on call should we need one. It was a great experience and made the transition from hospital to home much easier.

Neonatal nurses and children’s doctors have in my eyes the most important jobs in the world. They are kind, hardworking and often underappreciated. This article gives me the opportunity to thank the fertility doctors and staff at the Westend Fertility Centre and doctors and staff at the Virchow Clinic for all of their help. Without them, we would not have our family.

Just in time for Christmas, and 42 days after their birth, we were blessed with the greatest Christmas present of all. Max and Mathilda were given the all-clear and we could spend the festive season at home as a family. Finally, after years of fighting, pressure, and hardship, the hardest times were behind us.

Whenever I get only four hours sleep or I’ve had a stressful day, I think about our infertility journey. It puts everything in perspective and I appreciate how lucky I am. During those hard years, I learned many valuable lessons that have made me a better man.

The hard times have helped me focus on my goal of having the world’s greatest parenting blog and having as much time as possible for my two little miracles.

You can read James’s blog at scantilydad.com


Warning: A non-numeric value encountered in /home/scantily/public_html/wp-content/themes/Newspaper/includes/wp_booster/td_block.php on line 997

How To Stay Mentally On Top Of Your Game During Lockdown

Is Berlin The Best City For Infertile Parents?

Unwinding – The Secret Ingredient That Most Parents Forget

Parental Burnout – 4 Ways To Save Your Marriage From It

8 Ways For Sleep Deprived Parents To Improve Their Sleep Quality

6 ways That Journalling Has Made Me a Better Parent

The 6 best Things About having Twins

How To Make Your Mornings Easier.

How Parents Can Use Gratitude To Beat Depression.

The Hope for Fertility Foundation – Helping infertile couples to have...

Can Fertility Meditation help you through IVF treatment?

IVF nearly broke us: My article for the Irish Times.

ABOUT US
Scantily Dad, the World's most popular Dad blog. From survivor of multiple IVF treatments to father of Twins. Contact us: james.doherty@scantilydad.com
FOLLOW US
© “We are a participant in the Amazon Services LLC Associates Program, an affiliate advertising program designed to provide a means for us to earn fees by linking to Amazon.com and affiliated sites.”
MORE STORIES

Manduca Baby Carrier Review – 11 Reasons You and Your Baby...